A little late to post, but here is our Chistmas card this year.  Two sweet friends helped us pull it together, both with very little notice.  Dolly did a last minute photo session, and Lydia did the beautiful handwritten words.  I love how it all came together. 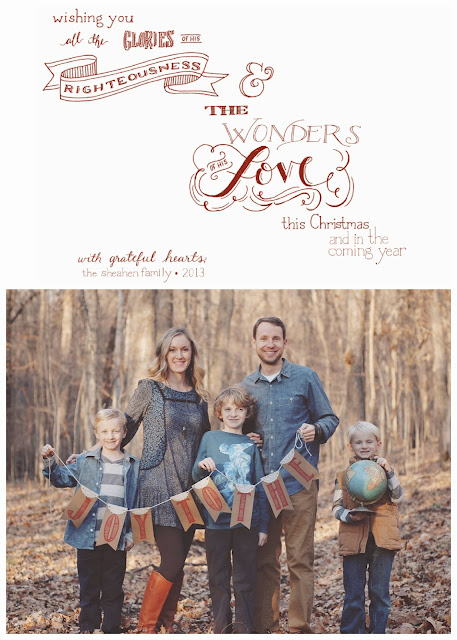 This past year has truly been a year filled with the glories of the Lord's righteousness and wonders of His love for our family.  I am amazed every single day by the way He is working out the details and making straight the paths that He has laid before us.  Our faith has grown by leaps and bounds and our trust in His promises has never been stronger.  I couldn't be more thankful that He has laid adoption on our hearts and will be forever grateful for this journey we are walking, hand in hand with Him.  I am full of confident hope that 2014 will bring great and wonderful things that God will do, things that we haven't even begun to imagine.

"Call to me and I will answer you. I’ll tell you great and wonderful things that you could never figure out on your own."  {Jeremiah 33:3}

To see the rest of our family photo session at Radnor Lake with Dolly, visit twelve16photography's website.

Check back tomorrow for something pretty great that I can't wait to share.

Peace and blessings on your New Year!

Posted by JONATHAN and SHAWNA at 4:35 PM 2 comments:

The things I will remember

November was definitely a month to remember.  There have been some awesome highs and some discouraging lows, but what I want to remember out of November are all the mighty works of the Lord.

First of all, I turned 40 on the 5th and my sweet husband threw me a surprise party!   Although I had been a little suspicious that he was up to some kind of planning, he got me good when it actually came party time.  With the help of some family and friends, it was a lovely night and I'm so thankful that I got to spend it with so many people that mean so much to me.  The Lord has blessed me far greater than I deserve in my 40 years on this earth, and I am so thankful to Him for every good gift that He has given me.  My prayer for my birthday was that this will be the last birthday I spend without Tallulah home with our family! 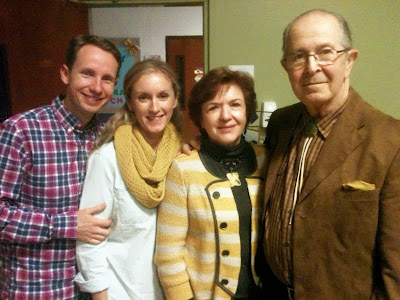 {me, Jonathan and my sweet parents who drove up for my birthday and then drove back the
next weekend for Pickin' & Pies!} 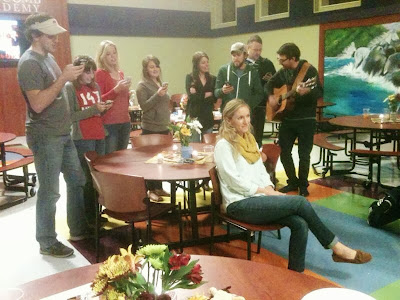 A week after my birthday party was our benefit concert, Pickin' & Pies, and what a high that was!  It really was an incredible, God-glorifying day.  I can't even put into words how much it meant to us that so many people were there and shared in such a special day with us.  We had a crew of friends that were there helping set up starting at 8:30 am and didn't leave until 6 pm.  Several hours were put into it before the day even arrived- not just by us, but by several of our friends.  Anyone that was involved with the event went above and beyond what we asked of them, and we can not thank them enough for what they did for us.  For what they did for our daughter that they've never even met.  So much love was poured into that event and into our family- not just by our friends who were there helping, but also by the people who came to support us.  People drove from near and far, some as far as 4 hours away.  They came and they gave generously.  They brought pies.  They bought t-shirts and our handmade crosses. They pooled their money for auction items.   They ate, they visited, they played, they listened and they watched (we watched) as God made a small fleeting thought about a concert to help bring Lulah home into something bigger than we ever thought it could be.  But no surprise there.  He's really good at doing that.   Through so many generous, loving people, we raised around $5,000 that day. Praise the Lord for He is good!!!!!

There are so many ways that we saw Him at work in the details over the last several months.  I don't have room or time to tell them all, but I will remember them all.  I'll remember Farmer Paul telling me about why he said yes to us having the event on his beautiful farm when he didn't know us at all and had never let anyone do that before: "Well, I don't know.  It just seemed like the right thing to do." I'll remember how DJ at Just Love Coffee Roasters responded to my email asking him if they would be willing to donate coffee for the event: "We don't normally do this, but I read your story and I'd like to see what I can do for you."  I'll remember the man who owned the Cane Ery Antiques on 8th Avenue, when I went to his shop to buy a few pieces of vintage hardware and decorative wood pieces for the 50+ crosses we were working on.  I told him that my husband and I make and sell the crosses to raise money for our adoption and he told me to pick whatever I wanted from two huge boxes full of stuff that hadn't been put out yet.  Then he gave it all to me.  Over $300 worth.  I'll remember Lindell, the lady that I met at Chick-Fil-A a few days before the concert- a day when I was pretty anxious about some details that were not really coming together out at the farm- that spoke scripture over me and spoke exactly what I had asked God for in prayer just an hour before I met her.   I'll remember Ray, the precious 90 year old man at church who couldn't make it to the concert, but spent his Thursday making six delicious pies to send with us.  I'll remember Chris and Steph, who I don't think had any idea who I was when I emailed them about playing at the concert, but without hesitation said, "Adoption is near and dear to our hearts...we would love to be a part of it...we're here to serve."  I'll remember how I had prayed for the Lord to provide us with a photographer that would be willing to just be there that day and document the event for us (at no charge), and instead of providing one, He provided two- sweet Dolly and Lindsay- who again, even though they had never met us, were so happy and excited to be there and serve in whatever way we wanted them to.   I'll remember what someone wrote me after the concert when I had thanked him for his gracious help:
"...it was one of those things that was just a huge blessing to me to be a part of. There were so many people there that I love. It was just awesome to be able to be with those people, all joined around your family and your sweet girl. Also, since the event, I've found myself so much more mindful of the Lord around me. Through your journey, there are no telling how many people who are understanding more fully the beauty of adoption and it's parallel to us as orphans. We're praying daily for God's blessings on your family and on your daughter."

But then I will remember all you have done, O Lord;    I remember Your wonderful deeds of long ago.12 They are constantly in my thoughts.    I cannot stop thinking about Your mighty works.
{Psalm 77:11-12} 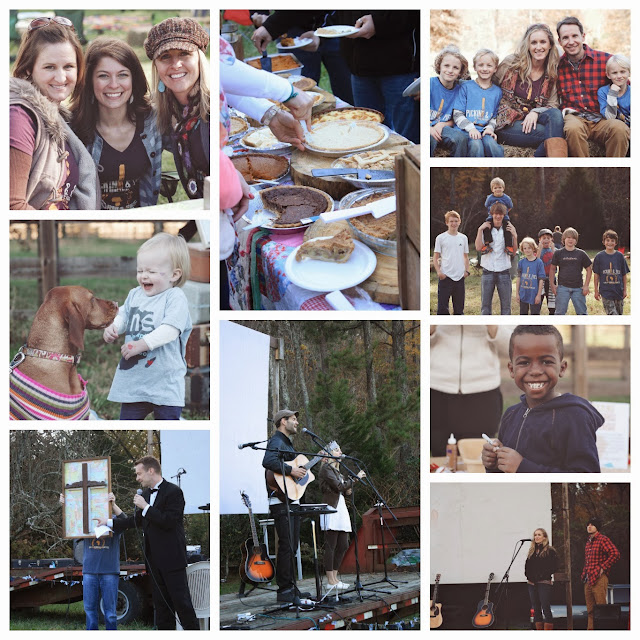 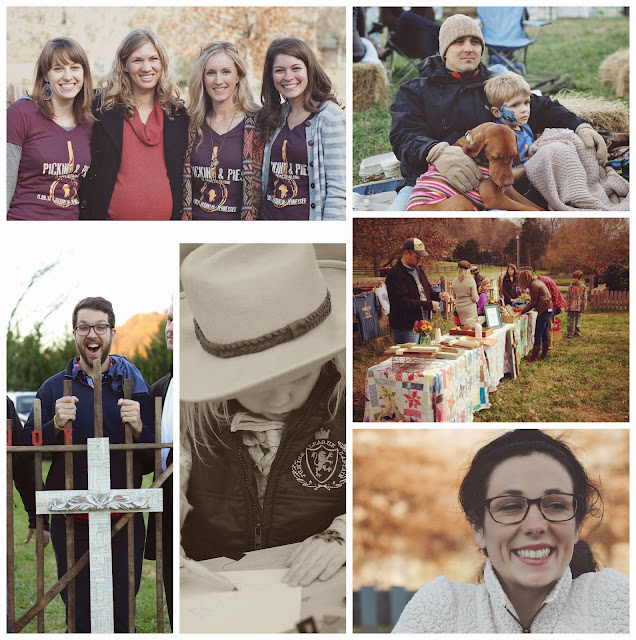 {For more gorgeous photos from the day, click on this link.}

Two days after the concert, we were hit with a low.  The enemy started messing with us and made it clear how much he doesn't want this adoption to happen.  We were reminded that this is a battle that we are fighting against one who doesn't want the lonely to be set in families- against a whole army of darkness.

For we are not fighting against flesh-and-blood enemies, but against evil rulers and authorities of the unseen world, against mighty powers in this dark world, and against evil spirits in the heavenly places.
{Ephesians 6:12}

But we will not lose hope.  We know God has already won the victory.  After that low came, a wise friend gave me much needed encouragement that I believe came straight from God, reminding me to TRUST.  She said, "The concert was a mountain-top moment for you all as you draw closer to the reality of welcoming another child into your home with loving arms.  With that, I want you to understand that moments like that set up conditions for the perfect storm.  TRUST that when you asked Jesus into your boat, storms would come and come quickly.  Our peace in that storm comes from our faith that we TRUST that He desires what is best for you even more than you do."  I know He does, but it was nice to have the reminder.  Although I can't go into all the details of this particular low we are facing right now, we ask for your prayers during this time of uncertainty.  We're not sure exactly what road we will be taking in the next few weeks, but we know that He will lead us down the right one because He already knows where we are headed, and I have a feeling that He's got something very special planned.  Please pray for our peace in His leading. Pray for greater trust. Pray for our willingness to be led into even greater depths with Him, even when we cannot see.

Once again, He encouraged me with scripture just when I needed it most- this time coming through a friend of a friend.  That scripture also comes from Psalm 77:

Your road led through the sea,
Your pathway through the mighty waters-
a pathway no one knew was there!
{Psalm 77:19}

Even through the hard days, November reminded us of how much we have to be thankful for.  Thank you so much to those who have continually lifted our names up before the Father.  You are a blessing to our family.  We ask that you boldly continue to do so, and if you aren't already, we would especially love for you to join us Sunday nights at 9pm CST.

xoxo
Posted by JONATHAN and SHAWNA at 1:04 AM 3 comments: