Look, I am doing a new thing

I know this news is shocking to most of you that will be reading this. We have been super quiet about all of this, only telling our family and close friends what has been happening over the last few months (although this week I realized that even a few of my close friends didn't know what was going on and I thought they did, so that tells you how quiet we've been). Back in the fall we received a new referral for a little girl that was four years old. We were extremely hesitant, as you can imagine after what had just happened, but after much prayer and a few other measures that were taken to make sure she actually needed a family, we officially accepted her referral in early December. Since all of our paperwork was already in Uganda, we really didn't have to do anything on our end- we were just waiting for everything to be switched over to our agency's new (not crooked) lawyer and then after that we would wait to be assigned a court date. Although I am not typically a guarded person, I found myself taking on my husband's tendency (as far as adoption goes) of being very guarded with my feelings about all of this over the last few months. And I think that's okay. It's not that we weren't hopeful, but we had just gone through two really bad adoption scenarios, with the second being much worse than the first. We had faced the hard realities of international adoption. We were trying to be "cautiously optimistic", but I will tell you I was getting weary. But God...

Our small group family had been praying that Lulah and Jovia would come home by the end of 2014. When that was definitely not happening, we still kept praying for that timeline. Even though we got a new referral quickly, we knew that it was next to impossible to bring any child home by the end of 2014. But we all still kept praying. Mid-December came and nothing was happening and my prayer switched to "Lord, just let us hear something by December 31st. Something from our agency with an indication of when we might get a court date. Anything." I literally checked my email as I went to bed on New Year's Eve, and was so disappointed that there was nothing. No word from our agency. The next morning I slept in late and stayed in bed for a while, scrolling through instagram, and kind of lost it when I saw a couple meeting their son for the first time in Uganda. I was sad that this was all taking so long. And I was a little mad at God for not giving us just something, anything, by December 31st. Then Jonathan came in the room and noticed that I had been crying. He asked what was wrong, I told him, and then he said, "I had a dream that we adopted two girls." I perked up a bit. "You did?" I asked, "Tell me more." He gave me all the details he could, which was a lot. Unlike me, he's good at remembering lots of dream details. None of it made any sense, but I thought at least that was something that he had a dream that we had adopted two girls.  It had to mean something, right? We were staying at a lake house with some of our best friends, one of whom just happens to have a gift of dream interpretation (in my opinion). We came out for breakfast and after chatting for a while I brought up Jonathan's dream. She wanted to know all the details and even got more out of Jonathan than I had. There was a family in the dream, the Frist family, that were friends at the previous school where Jonathan worked, but not anyone we kept in touch with or saw on a regular basis. I thought it was really strange that they would have been in the dream. I could see Jen's wheels start turning as they always do and she asked, "Have you looked up the meaning of Frist?" Why don't I ever remember this?? She does it every time with people that are in dreams and for some reason I still don't think to do that. Even though so often that has proven really important in the interpretation of the dream. Anyway, even then, I still thought, "Frist? That doesn't mean anything, does it?" But it does. We looked it up and here is the meaning:

Old English frist, first "a space of time". As a verb, meaning "delay".

For real. I love that this was not just a conversation between me and Jen, discussing God and all His mysterious ways, as so often is the case, but that Jonathan was a part of it too. Sometimes me relaying things that we talk about don't really have the same impact as they do if he is actually in on the conversation. When she read that definition that she had googled on her phone, he stopped eating his pancake and said, "Seriously?" Yup. God just did that. I believe that God gave Jonathan that dream to let us both know that He was listening and had not forgotten about our adoption, but for whatever reason there was going to be a delay. He gave us our answer on December 31st.

Fast forward to March. Things had been quiet. We had gotten some updated photos but no news on a court date. A couple of weeks before spring break, we were praying with the boys before bed and Jonathan specifically asked God that we would hear something by spring break. It makes me uncomfortable to put time limits on God (even after the previous story), and at the time I thought, "Well where did that come from?". He continued to pray that prayer, and I honestly can't even tell you if I joined in on praying that prayer. But the Friday before Spring Break, as we had both just gotten off a plane in Haiti, we got an email from our agency with our affidavit from the Ugandan court. It gave no indication of when we would be assigned a date still, but at least it was something. From an actual court in Uganda. Something was moving, and God gave us our answer before spring break.
We were still cautiously optimistic, but moving a little more towards the optimistic side.

Fast forward to early last week. Our agency emailed us just to let us know that she had emailed the lawyer in Uganda and that she hoped to hear an update on our case that week. I started praying that we would in deed hear something by the end of the week. Thursday afternoon I was sitting in Jonathan's office after school and saw that I had an email from our agency. My stomach did a flip, which is not normal at all when I see an email from them- because, 3 years. But somehow I knew. The email simply said,
Hi Shawna

I just got notice that you have a court date for June 2nd.  Can you make this?  I will ask how long you need to be in country and how many trips you will have to do.
Regards
Carol

There are so many details that still need to be worked out and so many unknowns until we get there, but what we do know is that we are leaving next Saturday, May 30th. We arrive Sunday night and Monday we are supposed to be taken to meet our {hopeful} daughter. She is five and she is adorable and her name is Gift. (Yes, her given name is Gift. That's how God rolls.) We are planning on giving her a new name but won't decide on that until we meet her. I can't even. So I won't.

The rest of the plan is on Tuesday, we are supposed to go to court to declare our intent to adopt her. Then we spend a lot of time with her over the next week and a half, see all that we can see of Uganda, then fly out to Malawi to meet up with our team there on a mission trip that we've been planning for months. It's a lot. I know.

We ask for your prayers as we journey to Africa. This coming week will bring a lot of stress in getting everything prepared to leave for most of the month of June. Although I am very excited about the trip, I am not excited to leave my sweet boys for such a long time. They have been so encouraging to me though, telling me that they will be fine and that they still want me to go on to Malawi (because I was thinking of not). Eli said, "You've wanted to go to Malawi for so long and I just want you to have the experience and I want to see all the pictures you'll take. " :)  I can't really argue with that. Please pray that we will have a peace that passes all understanding no matter what happens. I will say since the New Year's Eve dream, we have both been more at peace with everything than we have ever been since we started this journey three years ago. We know that if she belongs in our family, God will put her in our family.  And if she doesn't belong in our family, that God will make this whole thing fail. That has been my prayer and I know He will answer it. And if a second daughter is in the grand plan, then He will show us when it's time. Because He is a good, good Father.

In the first couple of weeks of the new year, God was speaking this verse over and over to me:

For I am about to do something new. See, I have already begun! Do you not see it? I will make a pathway through the wilderness. I will create rivers in the dry wasteland. -Isaiah 43:19

So I wrote it on our kitchen chalkboard, decided to keep it there all year, and believe that God will do what He has promised. 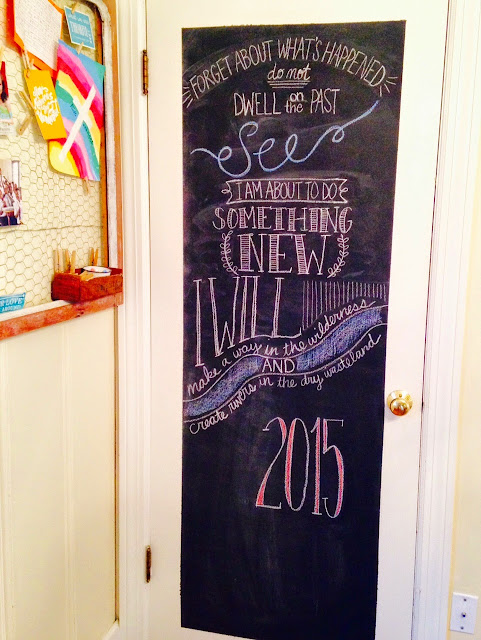